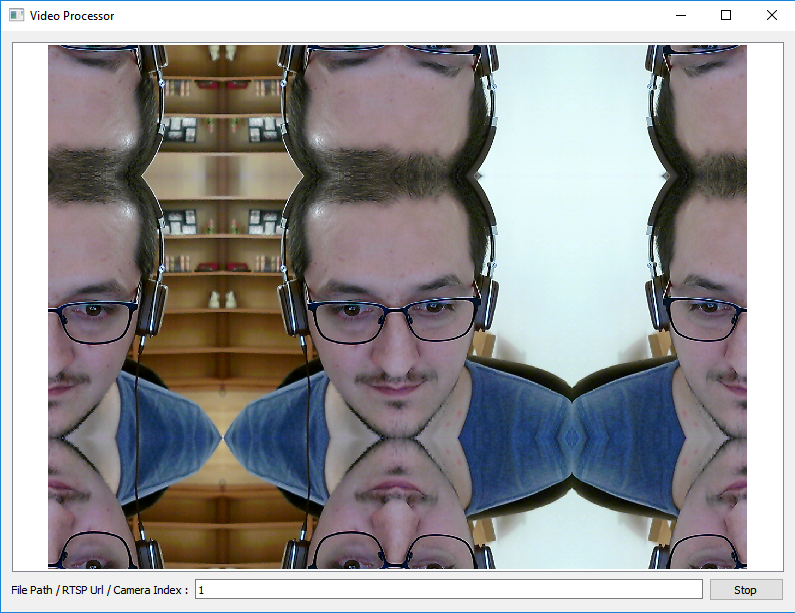 In this post I will describe the process of of reading, performing any arbitrary image processing algorithm and displaying an image read from a video file, camera or RTSP feed using OpenCV , and the same time keeping the user interface (created using Qt) responsive.

In this post, and in this example project, we assume the following to be true before being able to get into the details of how videos are read and displayed responsively:

Start by creating a Qt Widgets Application project using Qt Creator. When the project is created, you need to first add OpenCV libraries to your Qt project. See this post for more information. (You can also see this post to learn how you can use OpenCV with a Qt project that uses CMake build system)

We’re going to use a QGraphicsView widget to display the video frames read using OpenCV VideoCapture class. We’ll also use a QLineEdit widget to get the user entered camera index, file path or RTSP feed URL. Here’s a screenshot of the simple design of our user interface:

In the mainwindow.h file we need the following #include directives:

Besides that we need the following protected and private entries added to our MainWindow class:

We’ll be using closeEvent to prevent closing the user interface before stopping the video.

To initialize the QGraphicsView you just need the following in MainWindow constructor:

While the video is being read and processed, or the camera is being accessed, you need to make sure MainWindow can’t be closed. You can do this using the following:

In general, if you want to prevent closing a Qt window you have to override closeEvent as seen in the preceding code, and accept() or ignore() the event based on a condition.

Opening the Video or Camera

To be able to choose between camera or video file or RTSP feed URL, we try the entered text into the QLineEdit field. The we simply use the open() function of VideoCapture class as seen here:

Reading video frames using OpenCV’s VideoCapture class is quite simple. The trick here is that you need to put in qApp->processEvents() into each iteration of your loop to make sure the GUI thread and other events are processed, otherwise you video will be stuck, your screen will not be refreshed with new frames and most probably you’ll need to crash your app to be able to stop or quit it.

This is basically the most simple way of making sure your user interface is responsive while you read and process video frames. For more tutorials about this topic, and especially to learn how this is done using QThread classes and proper multi-threading, you can refer to my book Computer Vision with OpenCV 3 and Qt5, which also contains tons of examples to boost your Qt and OpenCV skills.

To be able to properly display OpenCV Mat images on a Qt QGraphicsView, you need to perform the following:

All of what we said might seem too much, but in fact you can get them all done using a couple lines of code, as seen here:

Using Format_RGB888 ensures that image data is converted as it is supposed to, and rgbSwapped() takes care of swapping the Blue and Red channels in a QImage.

Note that the item was added to the scene at the initialization, remember the following in MainWindow constructor:

Optionally you can use the following to make sure the image always fits the view no matter the window size of your application:

Note that you can replace KeepAspectRatio with any of the following to change how your images and video frames are resize to fit the view:

Here is a screenshot depicting how the final application looks like, when performing a simple copyMakeBorder process. Obviously you can replace the image processing code with anything you like:

You can get the complete source codes of the example project from this Bitbucket repository. You can ask your questions using the Comments section below.

19 Replies to “How to Read, Process and Display Videos Using Qt and OpenCV”