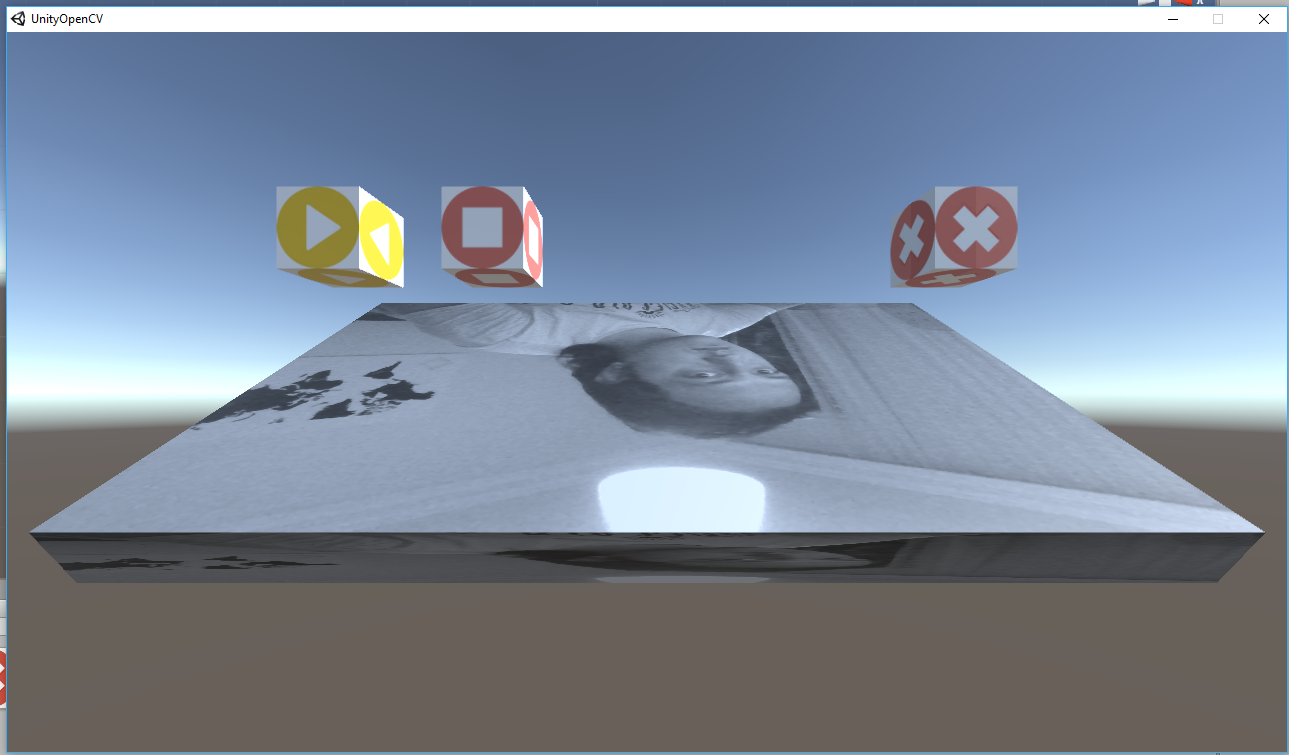 This is a post that many people have requested recently. I’m going to describe how you can use OpenCV in Unity. Of course we’ll be using official OpenCV libraries and not any assets or existing plugins.  For those of you who aren’t familiar with the subject, Unity is a very popular game engine which allows building games, apps and so called experiences with much ease. Unity allows some modified form of JavaScript and also C# for its scripting. In this example project I’ll use C# since that’s the language I’m familiar with but it shouldn’t be hard to adapt this to JavaScript (but you’re gonna do it yourself if needed, sorry) so let’s start.

Here’s an screenshot of the project shared in this post. Hopefully if you follow all the steps correctly you’ll have it running on your PC and Mobile.

First and foremost, as you might already know, OpenCV or at least standard OpenCV uses C++ and not C# so we’ll need to somehow call OpenCV C++ functions from C#. Think about it like this, if you already know how to use OpenCV then you can create a very simple library file (.dll, .so, .a and so on) in C++ which uses OpenCV the normal way. Then export those functions from the library and call them from C#. But before that we need to define a struct that we’ll use to receive images and video frames from Unity C# code.

And here’s how we need to define our exported function in the library. In its header file:

Note that this is the case for Windows. If you use some cross platform tool like Qt Creator you will have something like CVTESTSHARED_EXPORT instead of “__declspec(dllexport)” which will automatically adapt to Linux, macOS, iOS and so on.

And in source file we’ll have this which is the actual function and image processing part of the project:

Notice how we’re creating an OpenCV Mat using an array of Color32 struct we created. It’s basically a 32-bit image with R, G, B and Alpha channels because that’s how unity will send over images and video frames:

Now build your library and get your library file. (That would be .DLL for Windows, .SO for Android and so on)

You can also grab the source code for library from here. (It needs OpenCV and is created using Qt Creator but it doesn’t use any Qt library. Let me know if you face any difficulties building/modifying the library to fit your needs)

And next for the Unity part of the project, we’re going to use WebcamTexture class to easily access camera on almost any platform. (Note that from here on codes are in C# not C++ though they’re very similar)

Now the most important question is “How to pass images from Unity to OpenCV?” Well WebcamTexture provides a very simple method to get the raw image data. Similar functions exist for single images and video and so on. As you saw above we’ll use that raw data to create a Mat in OpenCV. Here’s how we’re going to get frames from the camera and pass it to our C++ code and library:

Of course we’re just calling it now. We need to actually define our project in the C# code in Unity, here’s how:

If you get a compiler error for not knowing what DllImport is, you should add this to the top of your C# code:

You can find the whole Unity project along with all source codes mentioned from this link.   Here are a few final (and very important) notes about using OpenCV in Unity. 1. You need to copy your C++ library to Plugins folder in Unity project. 2. You need to deploy OpenCV libraries used by your project along with the library itself.   You might want to read about Plugins in Unity and also make sure to comment below if you face any issues with the source code or have any questions.

35 Replies to “How to Use OpenCV in Unity (Example Project)”